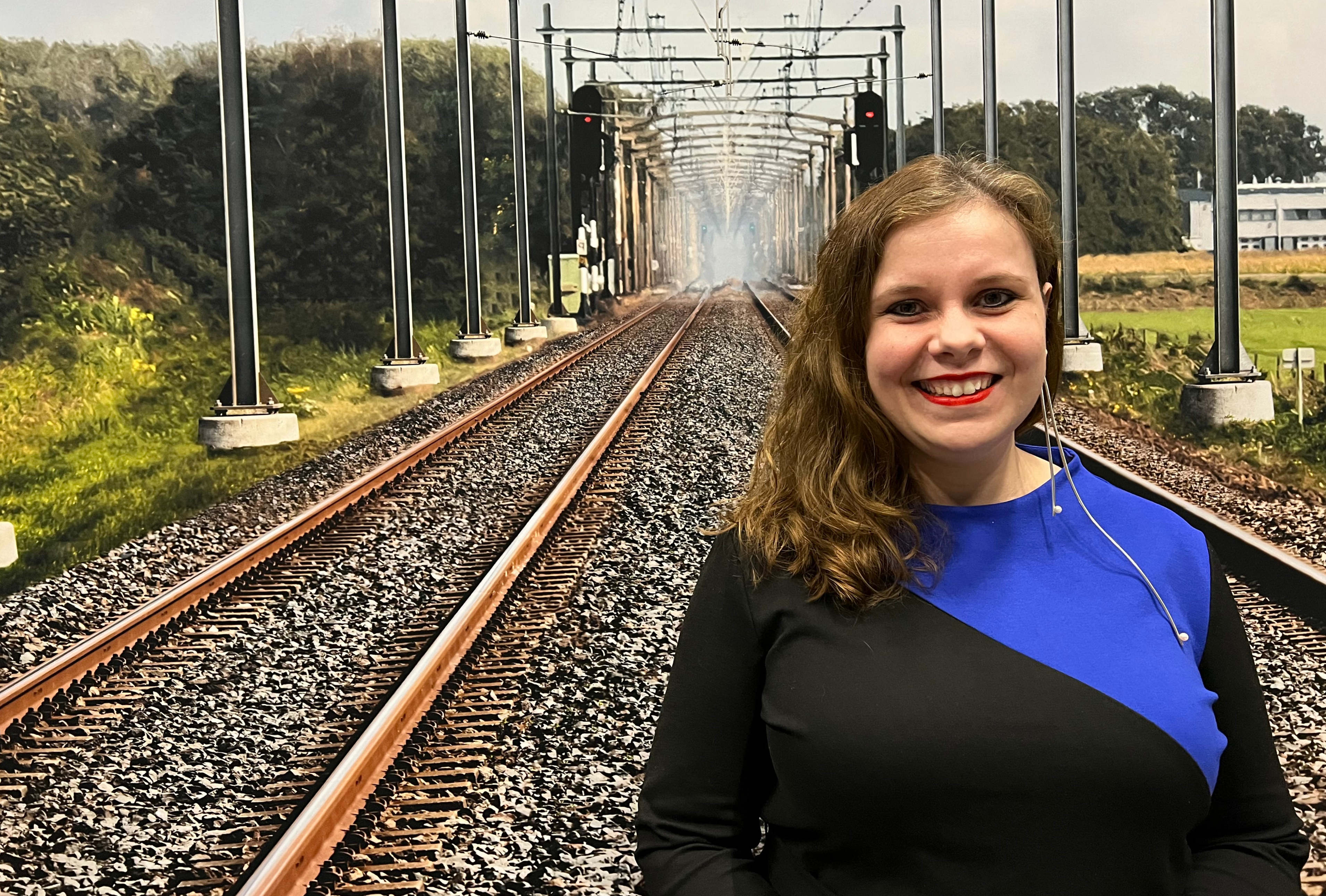 When Marleen van de Kerkhof stepped away from the flashy, innovative hyperloop world and took a position in the seemingly antiquated railway industry, it puzzled her colleagues in the railway industry. But for van de Kerkhof, it’s all about what has the potential to be the biggest game changer for climate change. She strongly believes that rail travel is the key to carbon-neutral transportation in Europe.

Van de Kerkhof is a breath of fresh air in the railway sector. In her short time in the industry, she has become one of its biggest advocates. Named Rail Ambassador in 2022 for the European Year of Youth, she pushes for digitalization and cross-border collaboration to increase capacity and encourage more train use. We sat down to discuss the dramatic change she’d like to see in the European rail system and how she believes we need to change the image of the rail system. 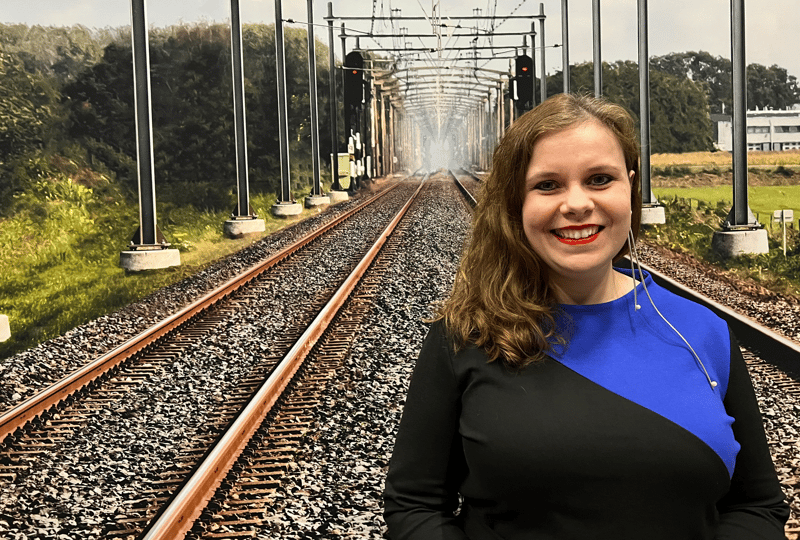 How did you get started in the rail industry?

At TU Delft, I worked in Hyperloop projects. The Hyperloop is amazing. It's very innovative, super-fast and energy efficient, but we don't have the infrastructure. We need new infrastructure, on the ground or underground. Looking at Europe, that's quite challenging. I think a European Hyperloop network won’t happen during my lifetime.

When I decided to shift to rail, people thought I had gone mad for leaving such an innovative project for railways. I find it important that people didn’t understand why. For me, environmental impact is the most important thing and the railway is by far the most sustainable mode of transport.

If you look at CO2 emissions in Europe, 25% are from transportation. Of that 25%, only 0.4% is from rail traffic. Looking at the goals of the European Commission to decarbonize transportation, the train is so important. In 2050, the goal is to have zero emissions in transport. We are never going to achieve that without trains.

I truly believe the train is the future and that's why I went into the rail sector. It's already very green and in Europe, you already have an amazing infrastructure for rail. You just need to optimize it and increase the capacity.

You have combined your background in engineering and policy analysis and now work for Dual Inventive. What do you do as the International Affairs Manager?

I want to create a single European railway area. I advocate for the implementation of standards across the European rail system and push for a shift away from a national approach.

I look at the way we cooperate with different rail actors in Europe and advocate the international harmonization in rail management using European standards. Member states aren't always obliged to implement them. There is still the option to stick to their national standards and systems. I want to stop that because otherwise, we’ll never have a single, well-connected European railway area.

Back in the day, if you traveled from France to Barcelona, you had to get off a French train and get on a Spanish train.

That’s because of the gauge. It’s a good example. I want a standard gauge of 1,435 millimeters for the whole of Europe. Now is the time to change.

If you want to promote social cohesion in Europe, the train is a great leveler. It always has been. It's very important to have that social connection, in addition to sustainability.

People are romantic about train travel. It would be nice to go from Amsterdam to Warsaw or Naples. Is that possible?

It will be possible, seamlessly. There’s great interest nowadays and there’s a real renaissance of the night train, but there are barriers. A couple of weeks ago, a night train from Austria could not run because the carriages were stranded on the border of the Netherlands and Germany due to non-coordinated track work at Emmerich and Venlo. Those are the stories I want to prevent.

Yeah, something like that doesn’t seem like we are living in the year 2022. There are technologies available to prevent such things. We just need the European Commission to decide what's needed and have the guts to make those decisions. Otherwise, nobody else is going to feel the responsibility to do it.

What’s your vision for the modernization of the European rail system? Do you ever think about that?

Oh, every day. We need one European system to manage trains and track work. Now, it’s all organized nationally. Looking at the interest in more cross-border trains for both freight and passengers, we need to join forces and have just one digital and flexible system to manage the capacity. We should have one European timetable. If the international freight and passenger timetable is the starting point for the national timetable, I think you’ll see there's more capacity available.

The rail system has to modernize and upgrade to have more capacity, better safety and more efficiency. That's what excites me – using new wireless technologies to improve the reliability of the rail network by preventing failures and to maximize the available capacity of the existing infrastructure.

Data is gathered by the infrastructure manager, the rail contractor and the rail carriers, but it’s challenging to share data because of data governance. We need new ways of cooperating to harness its potential.

There should also be more competition in the rail network and then it would be less expensive for people to opt to take the train. That's very important.

You also now have a startup. What does it do?

We have launched a new climate tech startup called The Decarbonisation Company. We have a solution to run the existing diesel engines in trains and track maintenance machines on renewable fuels like biomethanol.

Does your startup work mainly in the rail sector?

Yes, that's my focus because I love rail. What I found astonishing is that one in five trains still runs on diesel in Europe. In the Netherlands, we do a very good job with renewable energy, but in Eastern Europe, there are many diesel trains for freight and last mile. Only 60% of the whole rail network in Europe has overhead lines, so diesel is still the only alternative. The machines used for track maintenance are nearly exclusively diesel. It is therefore not easy to phase out diesel engines very quickly, so we need a transition technology.

My startup has a retrofit for the engine so you can use renewable fuels. Then you can still use the machines and trains because they have a very long lifetime. So, that's also sustainable to expand the lifetime of the rolling stock you already have.

So, you are advocating new fuels that could replace diesel fuel?

Definitely. The focus is now on battery/electric or hydrogen. But in the short term, those are not always feasible. They just aren’t cost-effective yet and we don't have the luxury to only opt for those two alternatives. I feel the urgency and we should reduce emissions as fast as possible.

We should do everything we can to improve the sustainability of the railway operation even though it is already a very sustainable mode of transport.

You are a young female leader in an unconventional industry. Is it a lonely space for you?

It is perceived as a male-dominated world, but as a woman, you get many opportunities. That doesn't mean you have to act like men. You can be your authentic self and that's appreciated. Although I’m often the only female speaker at rail conferences, I feel very welcome in the sector. I also get a lot of opportunities at Dual Inventive.

Women are underrepresented in the rail sector. Only about one-fifth of the workforce in European rail is female. I think it’s the image. People think of rail as really heavy work, like we're operating a train or like it’s a boy's thing.

We need to change that image. When I tell people that I work in railways, the first reaction is: “Are you a train operator?” People always think that you work at NS or ProRail, but there are a lot of technology providers for the railway.

I want to show that there's much more than just operating a train if you work in the railway sector. It's a career field that most young people, especially women, don't think about. Rail offers a highly innovative working environment. It is a fantastic world where old technologies, thanks to the connection with the most modern developments, are contributing to yet another sustainable industrial revolution.

What kind of positions are open for women?

I would say, what can’t you do? There are so many exciting jobs and so many ways to develop yourself. Rail has a very broad job landscape and for women, there are so many opportunities, especially if you have a technical background. 50% of all vacancies are about digitalization. There is also project management, digital innovations and cross-border affairs.

We need new people. So many track workers are retiring. The European Commission says that one-third of the rail workforce will retire within ten years. But at the same time, it's quite challenging to attract new talents to our sector because of the image. We really need youth. They are more open-minded and have fresh ideas. They’re not afraid to renew and cooperate. And young people increasingly feel it is important to contribute to a more sustainable world.

Do you mentor any young women who are interested in this field?

Yes, as the Rail Ambassador, I encounter a lot of young women. I like to inspire other women to pursue a rail career because there's such a need. There’s a challenging and meaningful job available for everybody in this diverse sector. I find it important to increase the visibility of the industry and inspire other young women because, if you don't know about it, then how can you find the opportunities?

The rail sector has the image of being a bit old-fashioned, but it is now rapidly changing because it has to change.

There are so many challenges to creating a single European railway area. Many things on the way could stop this vision and it would be so easy to just give up. That's why we need very motivating co-workers and young people in our network. The driving force of young people behind sustainability and innovation is of great importance to the rail sector!