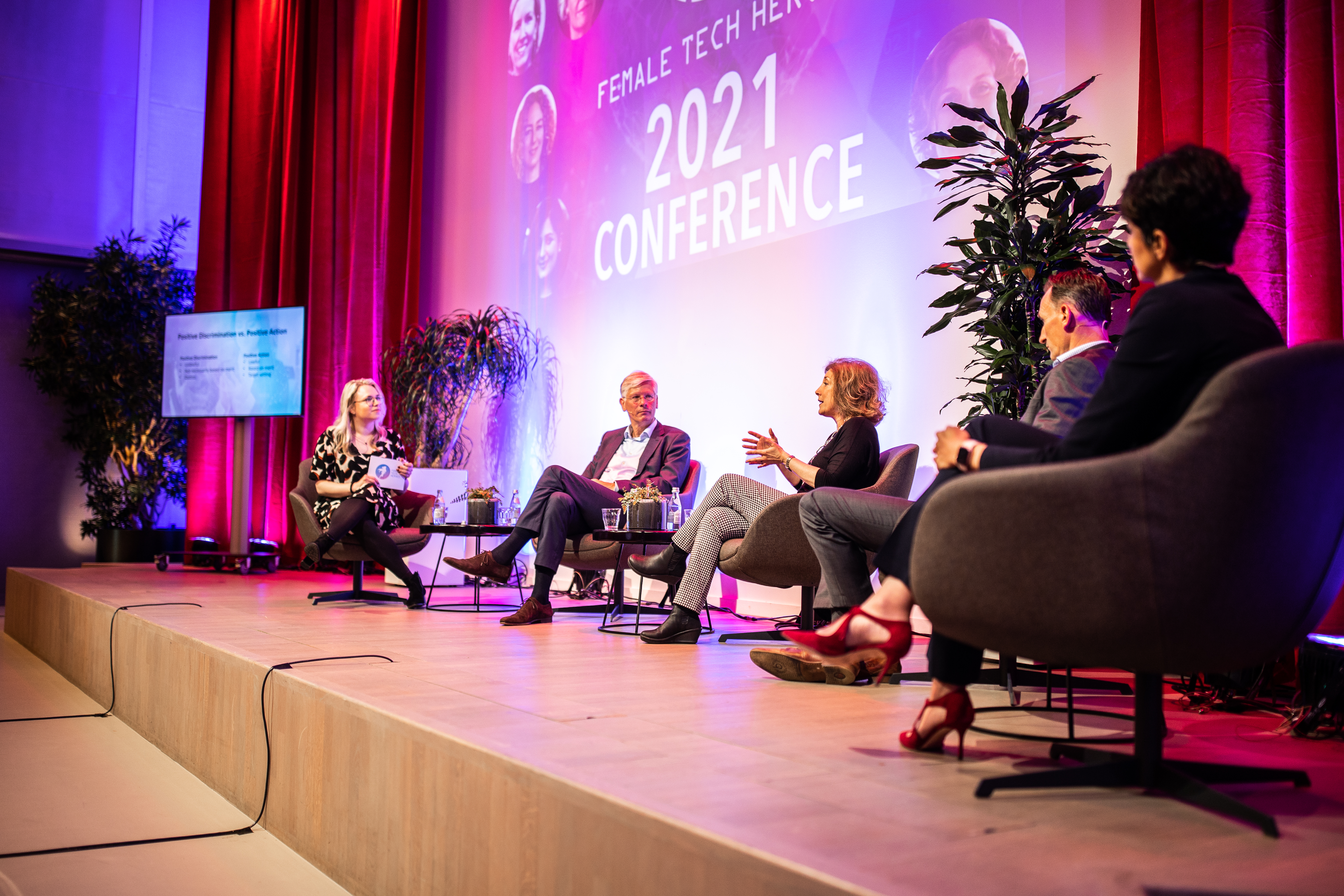 Recap of the Female Tech Heroes Conference 2021 (including videos!)

Fe+male Tech Heroes is connecting people to promote more diversity in tech. Owing to corona measures, getting together in person is not possible at the moment. However, in order to allow the conference to take place this year, founders Ingelou Stol and Hilde de Vocht decided to organize an online program. Over the course of two mornings, presentations by women in the tech world and panel discussions on achieving greater equality followed one another up.

Check the recap of the Conference here:

Amongst others, Rector magnificus Frank Baaijens from the Eindhoven University of Technology (TU/e) spoke about his University’s affirmative action policy for women in science positions.

Globally, the Netherlands is lagging behind when it comes to the number of women in the technical sector, Baaijens points out. “And as a university, we also have a very low percentage of female professors.” For many years, the university tried to get that percentage up through special programs for women, women on advisory committees and non-coercive quotas. “We were moving forward, but far too slowly.”

Unconscious ‘gender bias’
It became clear to Baaijens why progress was being made so slowly during a 2015 lecture at the Royal Holland Society of Sciences and Humanities. Among the speakers at that event was Naomi Ellemers, a professor at Utrecht University and one of the four Athena’s Angels. “She showed that how we judge each other is very much influenced by unconscious gender bias -implicit gender bias- especially in science,” said Ellemers.

When research proposals are submitted to referees, the ratio is fifty-fifty, Baaijens continues. “But when people are standing in front of a panel, then men suddenly seem to stand out much better.” The realization that he himself is just as susceptible as others to this unconscious bias was a shocking experience for the rector. He asked Ellemers to share the same story with his deans. After that, the “ball started rolling.”

The right candidate
The gender imbalance between women and men in science requires a rigorous intervention, according to Baaijens, “otherwise we won’t break through it. We are a part of it ourselves”. In 2018, the idea for what is known as the Irène Curie Fellowship program was born. “Just on a Saturday night, at home on the couch.”

Programs at the University of Groningen and Delft served as inspiration. “Relatively small programs with about 10 to 15 vacancies that only women could apply for.” He told his wife, who is also a professor. “She has experienced things that I ‘ve got know idea of as a man.” Baaijens came up with the idea that women would be given priority to scientific positions for six months.

By the end of 2018, there was the prospect of a relatively large number of vacancies: 150. “That’s a lot out of a total of 600 academic staff positions.” In part due to the growth of the university and people who had retired. “That was the moment, though, when we could make a difference. By interviewing only female candidates for the first six months, you can avoid having an unconscious bias towards a man or a woman. If in those six months it turns out that there is no suitable candidate among them, then you can still invite men as well as women. It’s all about the right candidate.”

Actively looking for new talent
Vacancies in science are often open for a year to two years, Baaijens says. “Six months seems like a long time, but in practice, it is not that long.” There is also an opt-out provision. “If there is still that one top male candidate among them, they can turn to me. We will then assess, in a small committee, whether or not he is in fact the most suitable candidate. That has only happened once.”

In the 18 months that the affirmative action policy has been in place, 53 women have been hired and 59 men. “That’s almost an equal ratio. We have never been able to do that before.” One side effect of the affirmative action policy was that the way of recruiting new talent has changed. “Simply waiting around to see who responds to a vacancy is no longer an option. Search committees are now approaching new talent in a more targeted fashion.” This happens all over the world. “Of the women that we have recruited, 70 percent are from abroad.”

It is also unacceptable to Baaijens that his wife is treated differently because she is a woman. Or that his daughters receive a different assessment than his son. “It does happen. That’s hard to change. We have to fight for that together. That we get rid of those implicit biases and in both women and men. Or in any event, at least make us aware of them.”

The Fellowship program received a lot of media attention. It also led to a complaint to the Netherlands Institute for Human Rights(College van de Rechten van de Mens). Baaijens had not expected this media attention. “At most, something in our university magazine the Cursor and in the local newspaper Eindhovens Dagblad. The fact that there was so much attention worldwide was a big surprise.”

Daring
The reactions were diverse. From ‘good that something is being tried for a change’, ‘to completely unacceptable’, says Baaijens. “I never thought that this discussion was so polarized. Apparently it is so deeply rooted in people.” According to the rector, the lengthy preliminary process showed that boards and deans were ready to do something different from what had been done over the past decade. “I saw that there is a willingness to take a step forward. I also think it’s impressive that our representative body, the university advisory board, dared to take that step.”

After the Netherlands Institute for Human Rights verdict on the complaint, Baaijens decided to amend the affirmative action policy. “We had been too rigorous according to the board. Our policy applied to all vacancies. That has since been revised.” As of 1 May, only vacancies are eligible for the Irène Curie Fellowship program where less than 35 percent are women in that faculty. According to the Netherlands Institute of Human Rights, if a faculty is above that percentage, it no longer constitutes a minority. Within TU/e, there is only one faculty where the percentage is higher than 35. That is the Industrial Engineering and Innovations Sciences, “what business administration used to be.”

Male stronghold
According to Baaijens, the Fellowship program "at least got everyone thinking."

"It has been, I think, the conversation at the coffee table in a lot of places. With some people, their opinions have changed in a positive direction; others are still adamantly opposed.”

Talking about more equality within the university has led to a change in, for example, a ‘male stronghold’ like the Faculty of Applied Physics. “Naomi Ellemers was invited at an early stage in the process there. Last year, the faculty received the diversity prize from the Physics Association. I think that’s really wonderful to see.”

Proud
Looking back, Fe+male Tech Heroes founder Stol is proud of the program she put together for two mornings. Apart from Baaijens, Nicole Papen Botterhuis, coordinator Research & Innovation at the Màxima Medical Center, for example, held a presentation with a hololens. This is an innovation made in collaboration with ASML that allows people to train to perform medical procedures remotely. Stol: “Really nice to see how she is introducing innovations to a hospital.”

Also among the speakers was Mindy Howard. Earlier, IO spoke with her about her dream of being the first Dutch astronaut in space. Some 30 years ago, she received her PhD from the Eindhoven University of Technology. She expressed her appreciation for the rector’s story. “I value his courage to stick his neck out and make this happen for TU Eindhoven. The university is no longer the same university as when I did my research there. It is very good that Frank and his colleagues are taking diversity and inclusivity seriously. And making bold changes that will impact the university over the years to come.”

The recording of the Conference can be viewed via these links:

Read more about Fe+male Tech Heroes and join the movement for free.