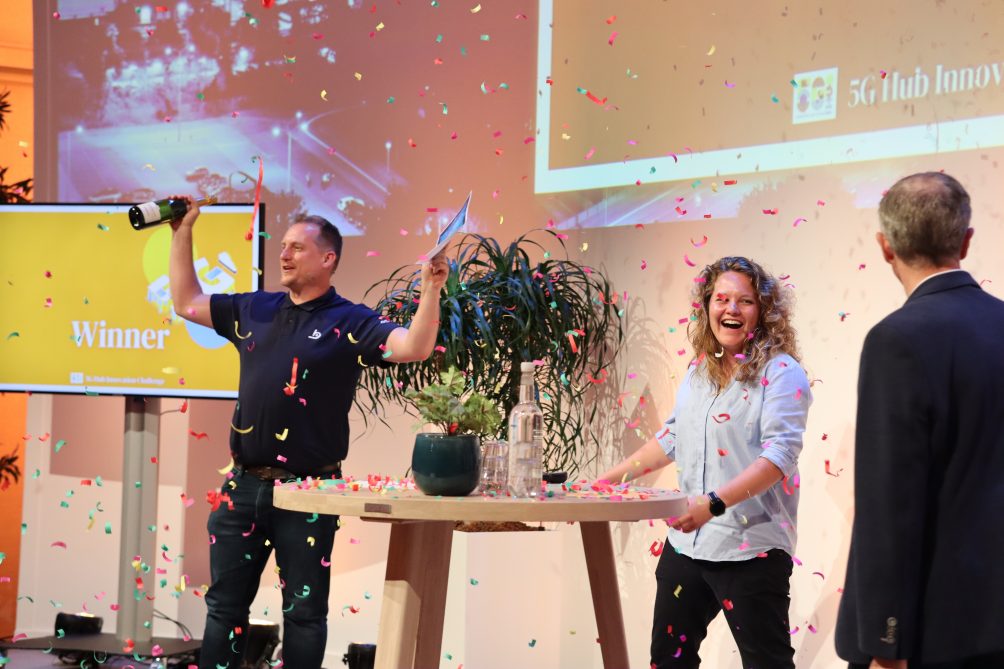 The 5G network is on the verge of breaking through

At the 5G Innovation Challenge, companies were able to pitch their wildest ideas. Five innovative concepts competed for the prize. Major companies are also increasingly seeing the potential of 5G.

A show featuring countless drones as a novelty in the entertainment industry. Robots as guards that make building security more efficient. Receiving targeted advertisements when you drive through a city and are feeling famished. Three ideas that competed in the finals of the 5G Hub Innovation Challenge at the High Tech Campus Eindhoven. The jury chose a robot that can weed farmers’ fields as the winner. Startup Voltgoed received the audience award for a prototype that enables heat pumps to make flexible use of energy sources such as solar and wind power.

Since early 2020, the 5G Hub has been housed at the High Tech Campus in Eindhoven. The four founding fathers VodafoneZiggo, Ericsson, HTCE and Brainport Development are committed to building a community where projects and initiatives with social impact are created.

In an effort to find those projects and initiatives, the hub, along with its partners Strict and Rabobank, penned the 5G Innovation Challenge. That challenge was launched two months ago. Twelve companies were chosen from all the entries and subsequently pitched their ideas. Five survived and received advice and feedback on their idea from the 5G Hub. They were ‘matched’ to people within the 5G Hub with whom their concept was further fine-tuned and improved. This week was the final. “Now we really get to work,” says winner Martijn Lukaart, CEO of Odd.Bot. He will receive six months of guidance from Brainport Development and one day of consultancy from Strict.

Training robots
Odd.Bot already has a machine driving around on fields in the Dutch province of Flevoland. That machine uses a smart camera to detect weeds. A gripper then plucks the unwanted plants from the fields. That’s generally still being done by hand at present. “I also now lug around an external hard drive and computer to process all that data,” Lukaart explains. “Ideally, I just want to see right away on my screen if the detection is OK, without having to process all the data first. That there’s just a simple robot riding around the crops, with a smart camera and a gripper as your eyes and hands, without a cumbersome computer.”

Lukaart envisions a swarm of robots that work smartly with each other and ride across the fields. One would detect what is growing and the condition of the plants, for example. Another will then weed out the weeds or fight lice. His dream is to ensure that plants, robots and people all learn from each other. Then chemical pesticides will no longer be necessary. And there will be no more large machines driving over the fields. “Those compact the soil. This kind of intensive farming eventually depletes the soil. I want to move towards sustainable cultivation solutions.”

Detecting fungi
A future in which a robot is even able to measure the photosynthesis of the leaves is something that Lukaart is already seeing. “So that you can deduce whether those plants are under any duress. To see what is causing that distress. For example, due to a lack of nutrients or owing to roots that are already rotting. You can retrieve that information with accurate sensors that you’re able to make work with artificial intelligence techniques. With that, you actually engineer detection that gets smarter and smarter and trains itself more and more.”

Odd.Bot’s machine is now learning to see as well as a human. “That’s going to take off in a big way. Robots will soon be able to see even more than we can with, for example, hyperspectral cameras or X-ray eyes.” According to Lukaart, weeding is just the beginning. “You can also start to detect fungi and track the health of the plants. We are removing stuff now, but you can also add something. By precision fertilization, for example, or by introducing a natural enemy.”

Jury member Stefan Krijnen, Industry and Ecosystem Manager at Ericsson, feels that “we are at a turning point of breaking through with the 5G network.” He started at telecom company Ericsson back in 2006, when the 3G network “was just on.” “The first smartphone wasn’t even out there yet. I’ve seen up close how the smartphone has evolved into a part of how we live, work and reside today.”

Adoption across the business community
The pressure for establishing a 5G network is increasing worldwide, says Krijnen. It’s not only in the Netherlands that national telecom companies have a nationwide 5G network for consumers. Ericsson, for example, has set up 86 live networks in North and South America, other European countries, the Middle East, Africa, Asia and Oceania. These allow consumers to download movies, music and websites much faster.

“But the biggest indicator of a turning point, is the adoption within the business community.” While Krijnen’s main focus in recent years has been to explain the value of the new network, he is now noticing that companies themselves are saying that the 5G network is the future. “These are, for example, large companies such as Bosch. But also innovative startups like we have seen during this 5G Innovation Challenge.”

The 5G Hub brings parties together to work on new applications for the mobile 5G network. In Krijnen’s opinion, this collaboration is essential in order to take an idea further. This is also the experience of the public’s winner Voltgoed. Via one of the hub’s founding fathers, VodafoneZiggo, its founders Horst Fietje, Stan Hoppenreijs and Jasper Verhoeve will soon be able to turn to Eneco.

Participating
The three men have developed a way to enable heat pumps to make flexible use of green electricity. During their pitch, they made it look as if the power had been cut. This was to illustrate that although we are capable of generating more green energy, if supply and demand are not properly matched, then “the risk of a total power outage becomes greater. In California last year in the months of June, July and August, power went out 9 times.” 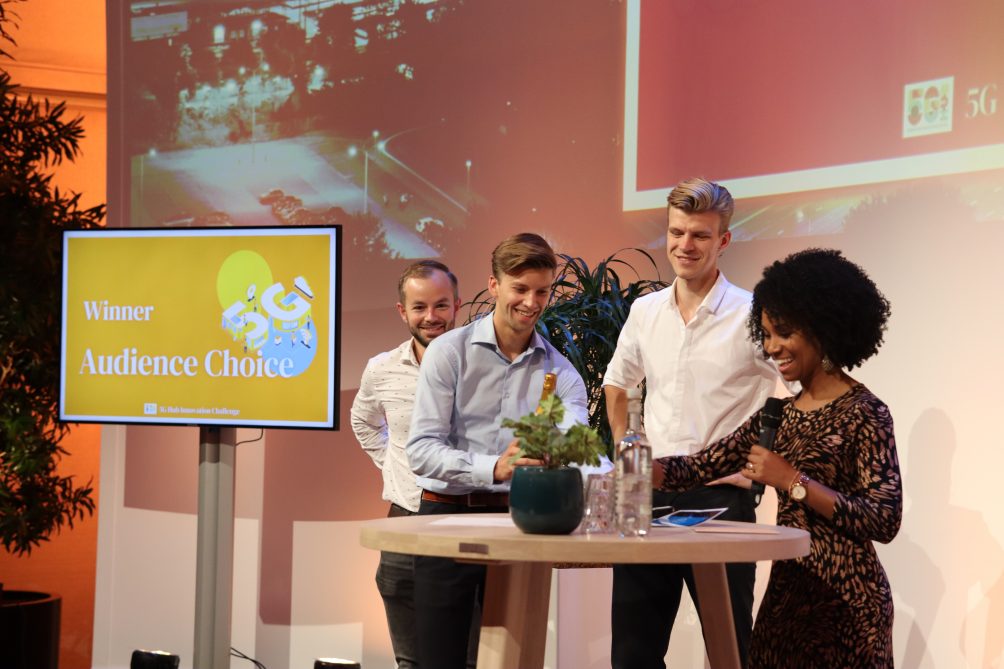 Fietje: “We were wondering who could help us to further develop our technique. We spoke to someone at VodafoneZiggo. We didn’t know that Ziggo was founded from a number of utility companies. Our coach, who also works at VodafoneZiggo, was therefore able to introduce us to Eneco (Eneco acquired the company that developed the smart energy meter Toon in 2015, ed.). We got a message from him at one point that he had tried to get the CEO of Eneco to visit us in September: ‘We’ll make sure you’re there then too.’ This is the reason why you participate in this kind of challenge.”

Even though there is only one winner, all the participating teams will still be connected to the 5G Hub, says Senna Kloosterman, who is involved in the hub on behalf of Ericsson. “We are looking for cool 5G innovations. And the more applications there are, the further we can take the technology. These 5 participants have shown the potential as very interesting projects. The winner will get a development program in the hub and we will work with them intensively. We will also continue to support the other companies and connect them to relevant companies within the campus and the Brainport region.”

Thanks to Innovation Origins for writing this article. You can also read it at their website.