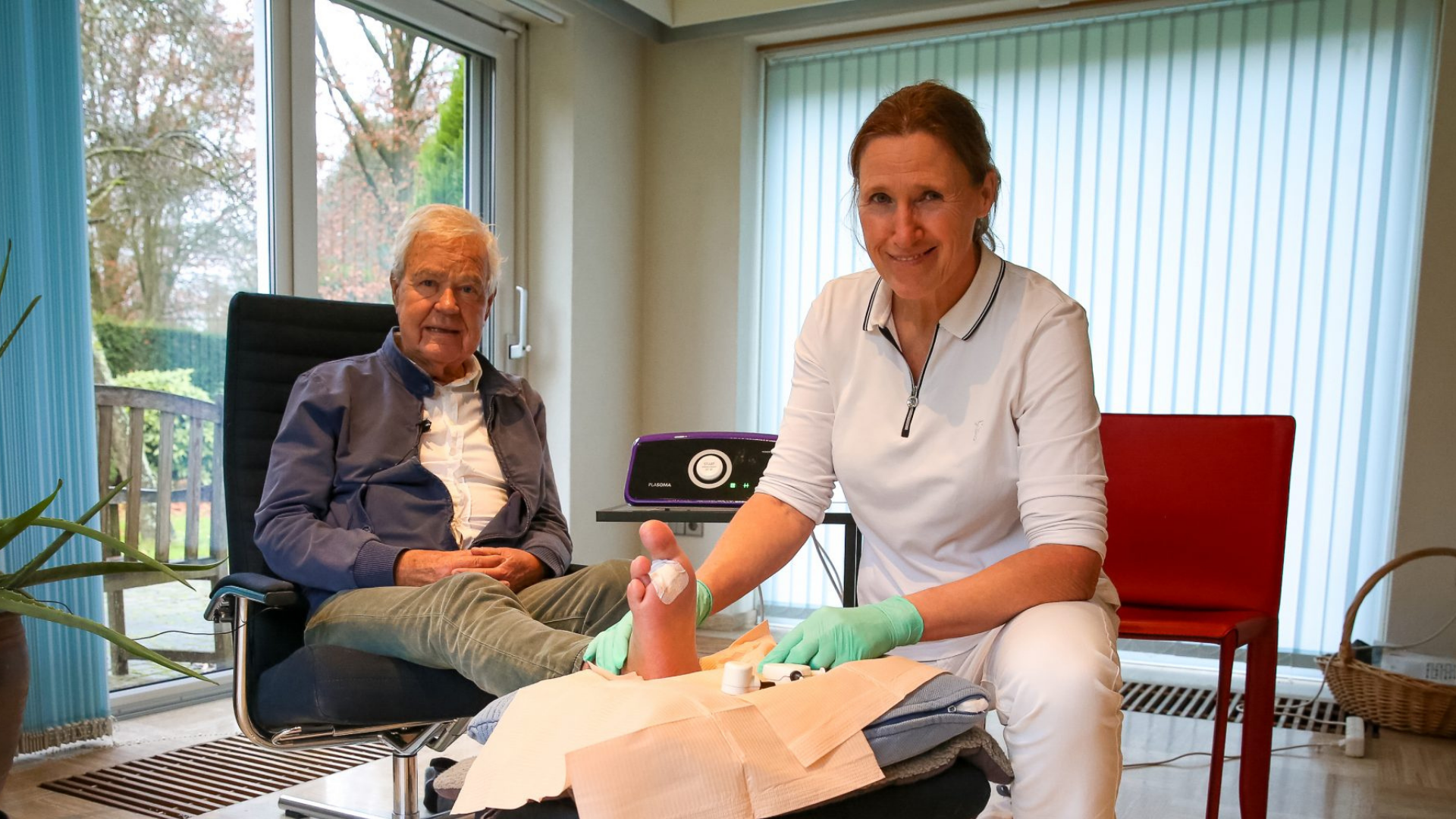 The healing qualities of a lightning bolt: meet startup Plasmacure 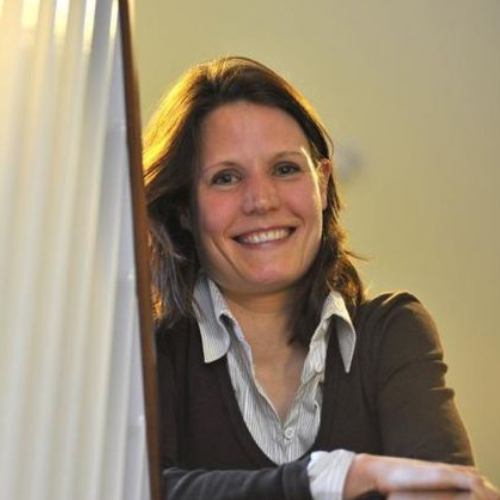 Wounds that are open for more than a year on average can be healed with a kind of mini lightning bolt. Startup Plasmacure has shown that this is possible. Since the end of 2020, podiatrists and other medical practitioners have been treating wounds with this innovative plaster. “Sixty percent of wounds healed within an average of seven weeks,” says Bas Zeper, founder of Plasmacure. "One wound had been open for more than four years."

The road to those effective treatments was a long one, Zeper notes. But the first clinical results with PLASOMA are promising. Behind the relatively simple and user-friendly looking plaster lies a wealth of technology. More than ten years ago, research began on a healing method that uses cold plasma to heal a chronically open wound. Zeper: “Bacteria just don’t like it when they are exposed to a high-energy state – plasma. They can’t survive that.” Plasma is the fourth fundamental state of matter state, after solid, liquid, and gas. Gas particles are ionized in plasma.

Disinfecting wounds
The idea to examine the principles of cold plasma in broad terms arose at the Eindhoven University of Technology (TU/e) among the physics and electrical engineering research groups. “Cold plasma is applied in all kinds of fields. For example, in the semiconductor industry or to disinfect medical instruments.”

This was how the bridge to disinfecting open wounds was made. “Usually, when someone suffers a wound, there’s nothing to worry about. The regular healing processes kick in, with the body often winning out over those bad bacteria.”

Numb feet
Zeper pitched his idea to, among others, Ingrid Ruys, a diabetes podiatrist at the Máxima Medical Center. Ruys: “We talked about diabetic feet and open wounds. These can be very problematic.” People with diabetes often have blood vessels that are in a poor state, so not much blood flows to the ends of the feet, Ruys explains. “This means that healing is not properly stimulated and there is a high chance of infection. High blood glucose levels also have an effect on healing. That problem in diabetic feet is much more complex than in other wounds.”

Such as the problem with footwear, the podiatrist points out. “If patients walk too much on shoes that are too narrow or too small, too much pressure is put on the feet. As a result, a wound won’t heal. People with diabetes often have less feeling in their feet. Where others stop when they feel pain to see what’s going on, someone who has neuropathy in addition to diabetes keeps on walking. They could even have a spoon or a knot in their shoe and not feel it at all. When you see pictures of these kinds of wounds you think: ‘that must hurt like hell, right?’ But the opposite is true.”

Starting a business
Through the research and various conversations with doctors and practitioners, Zeper saw the potential of cold plasma for healing chronic wounds. Having an idea for a medical innovation is one thing, being able to apply it in practice is another. Because academia does not develop products for the market, Zeper chose to start the company Plasmacure with the technology from TU/e. That was in 2014, and in 2016, Zeper hired his first employees. Now the company boasts 15 employees. The company has a facility on the High Tech Campus Eindhoven and one on the Novio Tech Campus in Nijmegen. Both locations offer plenty of technical support and networking from other start-ups, Zeper adds

In retrospect, it was a long road of carrying out research, testing and securing funding, Zeper goes on to say “In the beginning, there was scarcely any money and we were working on a few prototypes. Little by little we built up proof that I could use to get other funders interested as well.” Plasmacure received support from, among others, Metropolis Region Eindhoven (MRE) for the development of the prototype. The Rabobank Innovation Loan and the proof-of-concept loan from Brightmove helped the medtech start-up get through the initial period. Follow-up funding with venture capital then ensued.

Proof
The development of a medical application entails a lot of regulations, Zeper goes on to explain. “Safety is very important. They not only ask if it works, but more importantly if it is safe.” Demonstrating that safety and gathering the clinical proof took several years, and in the summer of 2020 the company received the CE marking for PLASOMA. With that recognition, it was allowed to enter the market with the treatment.

“We definitely celebrated then,” Zeper says. “Although the timing was very unusual. It was in the middle of corona. We were ready for the market, but the market was not ready for us. The patients were there all right. Suffering was only increasing. But you were not being heard at the hospitals with a non-corona-related treatment.”

Eventually, the Plasmacure team found a way into several hospitals and wound care centers in the Netherlands, such as the Máxima Medical Center in Veldhoven. Wound care providers were given the opportunity to treat five patients with the PLASOMA to experience how it works. “It’s new, so people sometimes have to cross a threshold to use it. That’s why they are first allowed to discover for themselves whether they want to go ahead with it. All we ask is that they share that experience with us.” A medical practitioner will figure out soon enough if it works, Zeper says. ” You can tell within a couple of weeks whether it’s working or not. If it works, you complete the treatment. If after four weeks you see that it isn’t doing anything, then you stop.”

Expansion
“We are seeing that it works in 60 % of chronic wounds.” At this point in time, the results of over thirty completed treatments from clinical and case studies are in. Plasmacure is also expanding the number of treatments. Initially in the Netherlands, but also in hospitals in Germany and the United Kingdom. “We use the results of these treatments to find out more precisely when the therapy is effective. In what kinds of wounds it works and in what ones it doesn’t, for example.”

Recently, Plasmacure was granted a European follow-up investment. “Some of that money is actually intended for entering the European market. We are looking at whether we can start serving larger markets. Treating patients there and picking up more clinical proof. Ultimately, it’s about opening up that market and selling our product all over the world.” 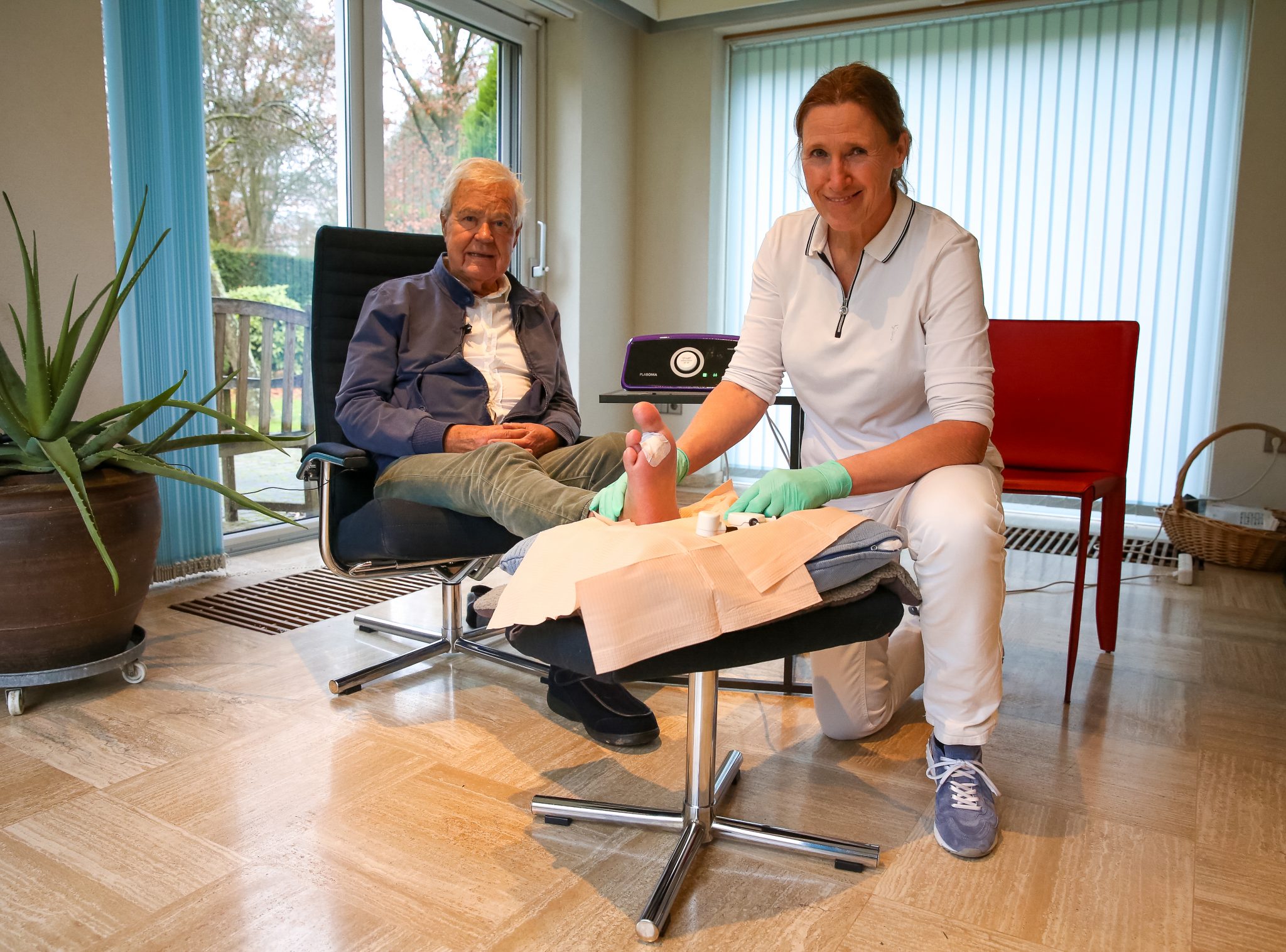 Referral
Zeper has noticed that patients in the Netherlands are finding their way to Plasmacure. “We are unable to approach patients ourselves. That always goes through medical practitioners.” After coverage in, for example, the Dutch RTL News television program, patients, but especially family caregivers, are now calling the company. “They ask where they can go to with their mother, father, aunt or uncle, and if they can buy the product. Because we don’t provide treatment ourselves, I can only refer them to one of the practitioners who use PLASOMA. We hope to be able to expand the number of treatments and thereby provide more coverage in the country.”

Zeper then approached diabetic podiatrist Ruys to ask if she would use PLASOMA to treat wounds. Ruys is currently testing the device. The plan is for a group of 35 patients to participate in the test. Half of them will receive the traditional treatment, the other half will receive a treatment with PLASOMA in addition to the traditional method. As yet, the podiatrist can’t say anything about the results. “We have only ten people in the group so far. Of those, five people are receiving the treatment. That’s not enough yet to make any substantiated statements about it.”

If it works, then according to Ruys, it will mean that fewer antibiotics will be needed. “That’s a huge advantage. Antibiotic resistance is increasing all the time. This would be a great way to solve that.”

Freedom of movement
If it does turn out to work well after the tests have been completed, the next step is to “write it into a guideline,” Ruys explains. “Right now, plaster is the gold standard for wounds on the bottom of feet.” Those guidelines are rewritten every five years. “It takes time to get a new treatment in there, however it would be nice, if it is shown to work, that PLASOMA will be included in the guideline.”

While Ruys is still cautious in her statements about the outcomes, Werd van der Horst dares to voice his opinion more plainly. He has diabetes and has been missing two toes since September. These have been removed. Van der Horst: “What you saw was a large gaping hole. You could stick a finger in it.” He sees the wound healing with each passing week. “I would venture to say that’s because of that device. I can recommend it to anyone with a diabetic wound like this one.”

From the inside out
The wound needs to heal and grow from the inside out, Van der Horst explains. “They don’t do any stitches. Since Ingrid has been treating me with that device every week, you can see the wound getting smaller every time.” Ingrid Ruys takes a special photo of the wound each session. A color code shows whether the tissue is healing, dead or infected. Red means the wound is clean. “In the beginning, it was ¼ red and ¾ black, which means that ¾ of the wound surface was dead tissue. Now it is almost completely red. That wound is closing incredibly fast.”

A month ago, Van der Horst was still walking with a cane, but now he can easily climb the stairs again, do the shopping and drive a car. “When my wife sees me walking, she is amazed at how supple that goes. It definitely gives me a lot of freedom of movement. Ingrid expects the large amputation wound will be closed by the end of the year. When I see the rate at which the healing is going, then it’s simply accelerating now. There’s only ten millimeters left and then it will be completely closed.”