This blog was written by Dispatches Europe

Front and center on the state HighTechXL’s founder and chief growth officer, savored the moment…the Eindhoven-based venture builder’s first live pitch event since 2019 and the debut of what Frericks dubbed “the Corona Cohorts.” “We have done something really special,” Guus Frericks said. “We have built ventures with people who have never met each other in person.”

Before the teams could take the stage at High Tech Campus Eindhoven’s Conference Center auditorium, Frericks gave the live/virtual audience of attendees and investors a probing dissection of where the Eindhoven is right now. The moment marked the beginning of the end of the pandemic. It also marked the end of the beginning for Eindhoven’s deep-tech ecosystem and the start of a new phase with more talent, more support and – most importantly – more early-stage capital for startups. 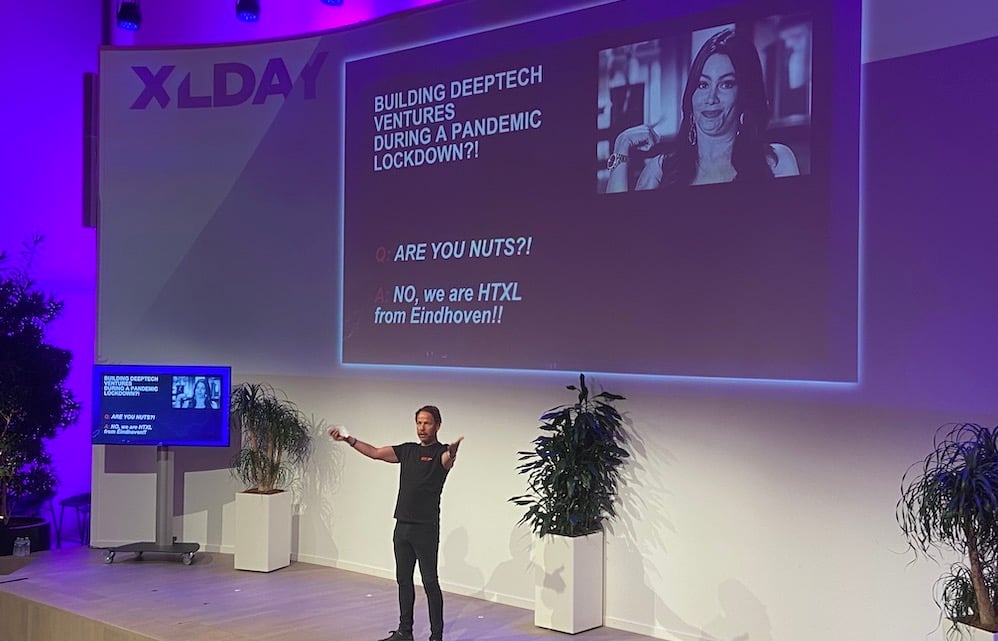 HighTechXL created 20 teams over 18 months in a series of Covid Cohort startups that persevered during the pandemic. Fifty percent survived what Frericks terms a “very tough program,” a much higher percentage than most accelerators, where typically only 33 percent survive 18 months. Compared to U.S. startups, the historic HighTechXL survival rate and value of the startups is far higher, four times better than average. “If you ask me why, it’s because it’s a community-driven system where we have figured out in the past decade how to mobilize the local know-how and expertise,” Frericks said. “And that is where we make the difference.”

He compared the conversion rate – the rate of startups that make it to later stages of funding – the Netherlands is at 36 percent compared to 70 percent in the U.S. and 80 percent in Israel.” Dutch officials rationalize the gap by saying bad companies fail faster in the Netherlands. “No…just no,” Frericks said. “What happens is, the country has a shortfall in scale-ups. “If we don’t increase the funnel of promising startups, there won’t be scale-ups.”

During the pandemic, it was so difficult for startups to get additional investment that Frericks joked that he could relate to how the head of the hospital emergency department felt – all the patients are in the beds, they’re all on oxygen.
But it wasn’t oxygen … it was lack of capital.

Overall, the Netherlands has all the ingredients that make the Silicon Valleys, Bostons and Austins successful, he concluded. “The only thing we need to fix is early-stage investment.”

Meet the teams in this blog by Dispatches Europe.